As I mentioned in our post about Growing Pains, it’s time for us to start building some serious automated testing into Tend. What I needed was a simple way to not only create tests, but to also run them automatically whenever changes are pushed to our Github repo.

First I’ll cover how I setup some basic testing in Laravel, then I’ll jump into show how I used Travis CI to automate the testing.

Creating Tests in Laravel 5.1*
As part of our infrastructure updates, we moved Tend to Larvel 5.1, which has PHPunit built in. To get started, use artisan to create a new test from the project root…

Which will create new UserTest class within the tests directory.

I also pulled in the use DatabaseTransactions trait which will automatically rollback any changes made to the database during testing (Really! It’s like magic!) So I end up with this…

To run your tests, your suppose to be able to execute with the phpunit command. However, for some reason this doesn’t work for me. So I had to use the following from my project root:

I also opted to use the SQLite database for testing. Only problem is that raw queries don’t play nice with SQLite. You can define in the config/database.php

And then you just need to tell Laravel that you want to use SQLite in the .env file.

If your like me, creating the testing isn’t enough. I’m not disciplined enough to remember to run the tests each time before I launch. I need for this to be automated, to run in the background, and notify me if anything is wrong.

This is where Travis CI comes in. Travis CI is directly integrated into Github’s UI. This means that every time I make a push changes up to Github, Travis CI automatically reads and runs the tests.

After sining up for Travis CI, the only thing you need to do to integrate it into Laravel’s testing, is to create a travis.yml file. Here is what I used for reference.

And that is it. Really! When you go to pull push to your Github repo, the changes will be made, and you’ll be notified directly in Github’s UI, and receive an email of the results. Now this is cool… 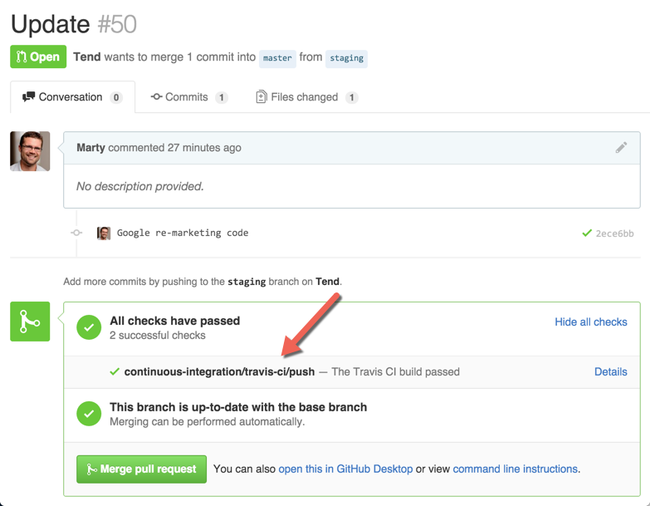 Start something that matters

Just finished listening to Start Something that Matters by Blake Mycoskie (the TOMS shoe guy). Interesting fact, TOMS is derivative of the word ‘tomorrow’ and the idea that we have a better tomorrow. There is no Tom. The book was very... Continue →